Skip to content
Toronto-based Sara Porter takes the In the Studio stage at Guelph Youth Studios on Saturday, June 4 at 4 pm.  Here, she tells us more about “Sara does a Solo,” her intimate piece which is part memoir, part stand-up comedy, part dance performance; and in whole, a beautiful and bold statement.
* * * * * * 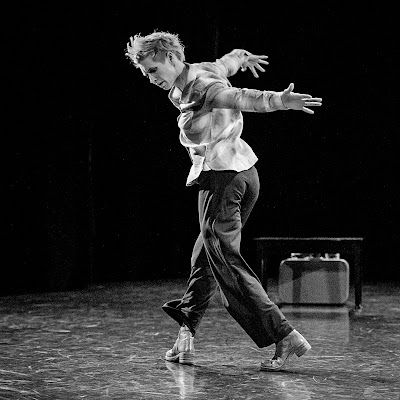 We all need reassurance.

: that things will beas we expect them to be : that we have a handleon what’s happening in our lives and in the world : that, despite all life’s uncertainties, that we know something, at least something that we can rely on…

I’ve been thinking a lot lately about live performance.

Last night, I ran the newest version of Sara does a Solo, under the masterful technical direction of James Kendal, in front of a small invited group. James is up for anything and I love that. (He doesn’t seem to mind if I call a cue from onstage and change the order of things, just spontaneously, just for fun.) But last night I thought: That’s it! It’s finished! After working on several different versions of Sara does a Solo over the past months – for various shows in New York and Toronto – I think I have finally arrived at the finished version of the piece. And I felt the satisfaction of having completed something. Ended, finished, done. This is the version I’m taking to Montreal (Studio 303) next week, and to the San Francisco International Arts Festival the following week. (May 20-22). I will be all set for Guelph in June. Now, I know what I’m doing!

Well, now, hang on a moment…

Sara does a Solois a piece that is in continual flux. I premiered it – the earliest version – in June 2014 at my studio in Toronto. And, frankly, I was terrified. I didn’t even know if it was a piece. But from there, I’ve shown it – in various iterations – at the Intergalactic Arts Collective Studio in Toronto, at the charming Evergreen Theatre in Nova Scotia, as part of Performance Mix Festival in New York City, at Dancemakers Theatre in the Distillery District as part of Older & Reckless in Toronto, and at Douglas Dunn’s Studio Salon on Broadway in NYC. Each time, a slightly different piece.

We laugh in rehearsal – my rehearsal assistants/creative facilitators Katherine Duncanson, Gerry Trentham and me – saying the title suggests I’m doing “a” solo – but doesn’t actually commit to any “particular” solo. That’s just to ease our stress of this continual change. The piece is continually in flux. And that is partly what it is about….

Sara does a Solois very much about the present tense, about what’s going on in the moment, both in the theatre as I perform, and in my life. As one audience member said recently, “It feels like you’re just making it up, right there in front of us.” Well, in fact, in some ways, I am.

There is a strong structure and clearly determined form and text, and much of it is, in fact, very carefully rehearsed. But, as a solo, I can follow – and respond to – what happens in the moment. That’s the fun and the danger of it. It’s much like life. There’s a frame, but there’s always space for exploration, invention, trying something a different way. For play.

That is, I think, what live performance is all about: living a small piece of your life in front of other people. So we get to ponder together what it’s about, what we might share, what is familiar and what is different amongst us. How we might cope.

My life is full of parenting, practicing, rehearsing, making things up, questioning who I am, whether I’m doing the right things, whether I’m too serious, or not serious enough. Whether I believe in what I’m doing – or if others believe in it. Who am I, anyway, and how did I get here? Sometimes it feels like I’m performing all the time. Other times, I’m not even certain if I know who I am. Everything moves.

So, it’s reassuring to know – at least – that I’ll be at the Guelph Dance Festival on June 4th with a piece called Sara does a Solo. That is confirmed. I’m really looking forward to it. But nobody – not even I – knows exactly what it will be. But don’t worry: something will happen. And it will be live. And so will you.