Skip to content
This is the second in a series of writings by Michele Green on enduring friendship and returning to dance later in life. Michele performs with Artist in Resident Suzette Sherman ‘On the Stage’ on Saturday, June 3, 8:00 pm, at the River Run Centre.
A JOURNAL OF A DANCER’S LEAP OF FAITH
by Michele Green
Never say never.
At 64 years old, one would think it safe to conclude that one’s journey as a dancer has truly ended. Especially considering that I haven’t danced professionally since 1976 and have been retired from a twenty-year career as a dance instructor for sixteen years. But things happen. 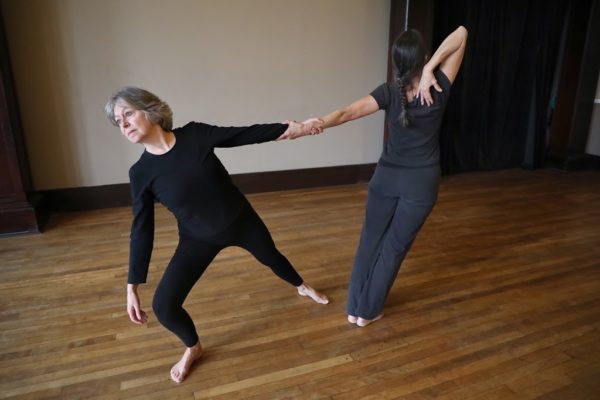 Happily retired and living northwest of Toronto, I re-connected with longtime friend and college Suzette Sherman who lives in the area. We enjoyed various classes in yoga, pilates and other fitness adventures together over the ensuing fifteen years while Suzette continued working with DanceTheatre DavidEarle in Guelph as instructor, teacher, mentor and performer. But, other than the period when I was writing the book ‘David Earle, a Choreographic Biography’ and spending hours at the studio interviewing David, my shadow has never darkened the studio door.
Over the years, Suzette has expressed an interest in dancing with me again. A ‘bucket list’ type of interest. My answer was always a slightly hysterical ‘my dancing days are over’.
And then, last summer, Suzette received funding for a residency with the 2017 Guelph Dance Festival during which she could collaborate with someone of her choice to create a work. Suzette discussed this with me from the beginning and I supported the names on her ‘possibility’ list. She mentioned putting me on the list a couple times and received my stock response. 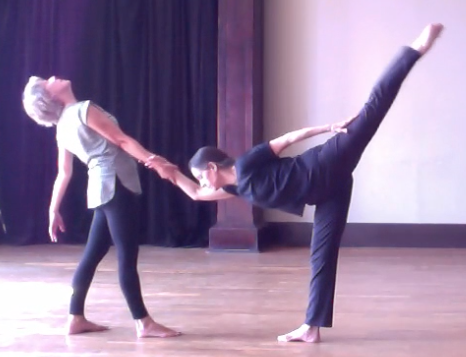 But something happened over the summer. We were both approaching our 64th birthdays and I woke up one morning thinking ‘why not?’ Worstcase scenario I would try one class and one of us would say ‘this isn’t going to work’. So after Suzette weathered a few unsuccessful attempts to work out schedules with others on her list, we settled on a plan.
On Friday, October 21st, 2016, I warmed up in the studio for an advanced class after a forty-year hiatus with the understanding that I would only do what I thought I could and then slip over to the corner like a wounded animal to watch. My personal goal was to make it through half of the floor work – fifteen minutes.
The body is a wonderful instrument. Although this instrument felt like it was critically in need of a tune-up, the movement I remembered and loved flowed back into my muscles; adrenaline flooded my brain. I made it through the entire class, jumps included. It was a glorious moment. Suzette hugged me and told me she couldn’t believe it. She was not alone. Dance fever was running through my veins and I knew it would take a lot to put the brakes on this journey now.
It is very intimidating to watch a seasoned professional like Suzette instruct a class. I’ve had several opportunities over the last few years to watch her teach, but participating is, of course, an entirely different experience. She has honed her skill to a level where the movements come organically, looking effortless and exquisite. She teaches with such attention to detail and love of the art form that every correction to the class is like the gift of a precious jewel. I had so much to re-learn, re-train and rejuvenate. It was all a bit overwhelming. But I like a challenge. 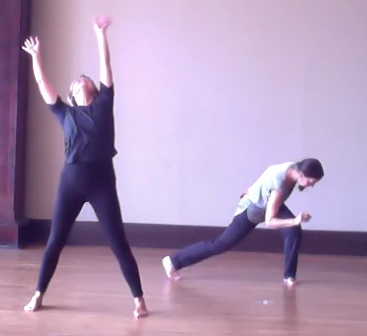 The next morning I woke up and could hardly move. Despite being in what might be considered excellent condition for my age, there were muscles I hadn’t used in years. My lower back was screaming at me from the contractions and spirals. My legs ached from fan kicks and grande battements. The bottoms of my feet felt raw from turns and jumps. It was great. I couldn’t wait for the next class.
We spent many hours listening to music that might be appropriate for our piece. Suzette has worked previously with pianist Emilyn Stam, and we eventually settled on a beautiful piano piece of hers entitled ‘Dusk’. With a theme based loosely on the forty-two years of our friendship, we set to work.
Two-hour weekly rehearsals started on November 8 at the local racquetball club where Suzette had rented space for us. We immediately loved working together again and the rehearsals breezed by much too quickly.
Suzette was generous with her praise and gentle with her ‘suggestions’ to lead me away from the years of habits I had built from teaching and motivating children. We videoed the number as it progressed and, although watching myself came with a fair share of grumbling on my part due to the disappointment between what I looked like in my mind and what reality was showing me, the videos proved endlessly helpful.
I added a second weekly technique class around the time that rehearsals started and we tagged short rehearsals on to the end of those two classes. In total I was doing about five hours of rehearsals and three hours of class time each week. It was not long before this old body started to protest. Other than basic stiffness, my foot protested for a few days, then my hip and then my back. It seemed there was always something nagging at me. I was still finding it difficult to pick up combinations in class and the combined frustration built to where I questioned this decision.
My biggest fear was to disappoint Suzette – either by backing out or (even worse) by not backing out of the project. This project was an opportunity for Suzette to spend studio time doing something she loved other than teaching or directing. Pure creative ‘fun’ and I began to doubt if I could rise to the challenge and to meet her expectations.

As good friends, we talked it out and I had to accept that the limitations I felt were not showing as much as I imagined. I was improving, gaining strength and renewing technique and our rehearsal time was truly enjoyable and creative. So we motored on.
Before we knew it, Christmas break had arrived and, although I begrudged the time off, my body was grateful for a three-week break. We had loosely finished the five-minute number and felt a real sense of accomplishment. Suzette seemed pleased with the results, although, considering that we both love the rehearsal and cleaning process, we used up every second of rehearsal time changing, tweaking and polishing each movement.
And so, into January. I was eager to begin, but, sidelined by the vicious flu that was running rampant through the country, I slithered rather than leapt back to classes and rehearsals.
Over the months I had become acquainted with the core of advanced dancers who attended most classes. Every young woman was gracious, kind and willing to help an old woman struggling with combinations across the floor. In the short time I had participated in classes I could see their technique improve, their grace and understanding of the movements clarified. All of course, because of Suzette’s relentless desire to not just ‘give a class’ but to truly ‘teach a class’. The difference lies in her deep understanding of the technique and her ability to explain in detail the essence and focus of the movements. Her standards are very high, just being in the class and following along is not good enough. Those listening could not help but improve and I hoped I was one of them. 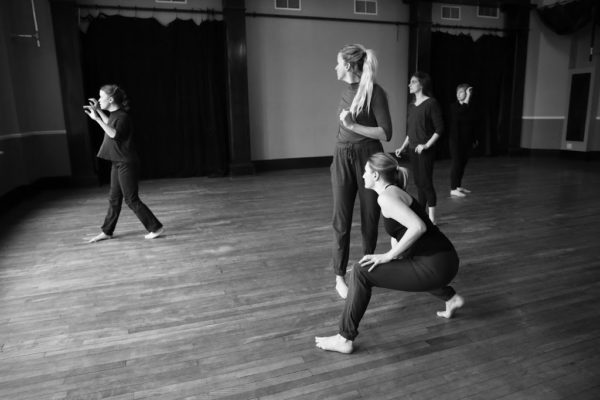 Suzette began reviewing the two solos that would bookend our duet in the show. As the only other person in the room I became the critical eye, watching for moments or movements that could be improved. Of course, those moments were virtually non-existent as her movements flowed so organically it was difficult to imagine any other path than the one she pursued. The seed of doubt resurfaced inside me. What was I thinking planning to be on the stage with this icon of modern dance? But Suzette could see the changes in my technique, my movement and the toning of my body, although it was more difficult for me to assess, and so we continued.
In early March we began teaching the duet to four of the senior women – Kelly Steadman, Megan O’Donnell, Georgia Simms and Jenna Oxley. The process was exciting to see how each couple changed the physical shape of the work. But the larger challenge would be how they would interpret the emotional context of a dance that was built around a forty-year friendship. Learning steps and timing is only a stepping stone to actual ‘dancing’ and finding their own individual meaning to make the piece their own would be critical.
……….
A third installment in this series is forthcoming. For tickets to see Suzette and Michele perform, visit the River Run Centre box office (519-763-3000).
Bottom photo: Ellen Snowball