Skip to content
We asked Alexandre Hamel, Founder of Le Patin Libre to tell us more about the origins of the company, and how a group of former competitive ice skaters began to make art on ice. His words are evocative, and a wonderful video about the making of the work they’re performing in Guelph is at the end of this post. You should definitely scroll all the way through and watch it!
Le Patin Libre performs on Stage A, Friday, June 3, 8 pm, at the University of Guelph’s gold ice rink. They also teach an ice skating workshop, suitable for all levels, on Saturday, June 4, 9:30 am.
Tickets available by clicking here or by phoning 519-763-3000.
Photos by Alicia Clarke
* * * * *
Vertical Influences is a contemporary ice-skating show.
Now, what’s contemporary ice-skating? It’s the result of a 10-year artistic adventure. 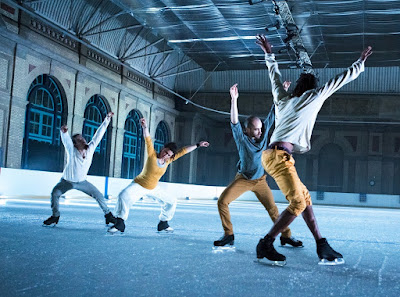 I launched Le Patin Libre in 2006. I was then a retiring figure skater. I competed on the international scene, skated professionally for Disney On Ice and in a few other big traditional figure skating shows. Sparkles and all… In 2006, I was also a Fine Arts student, at Concordia University in Montreal. I was studying film production.
During the 15 years of my intensive training as a figure skater, I always felt I didn’t fit into what figure skaters reverently call “Le Monde du Patin,” or “The Skating World.” I always found my training companions very obedient and blindly engulfed in this closed universe of competition, hyper-sexualisation, drama, superficialism and….sparkles, always more sparkles. But, I loved the moves and the challenge so much! I just kept going until university provided me a good excuse to get out of it. Figure skating is like a sect. It’s not that easy to get out of, especially after your parents have “invested” $15,000 a year in that weird training, secretly and crazily hoping you’ll be an Olympic champion.
At university, I was part of little indie video projects. I loved it! Still infused with the love of skating, I gathered a few skaters I knew to launch a little indie ice-show project. It seemed natural to me. This doesn’t exist in figure skating, however. Normally, it’s all about big money, big producers, big sport federations, an establishment approving it all, etc. 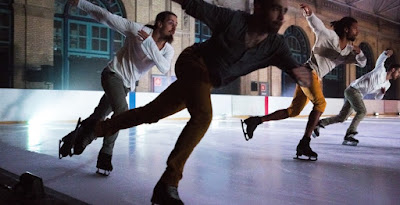 So, year one of the project included a few short performances on frozen ponds in little towns around Montreal. We performed in winter carnivals. It was simple and naive. Good skaters, funny numbers, a bit of acrobatics, a slightly rock ‘n roll attitude and….finally… no sparkles! Not a single one! I called the troupe Le Patin Libre. It means The Free Skate.
The shows were prepared very quickly because we didn’t have access to much ice time, between hockey games and traditional figure skating stuff. Doing anything happy and un-conservative is forbidden at public skating sessions (even empty ones), so we could not dance or practice there. We did rehearse outdoors, in the winter, but that’s often unreliable and feet freeze in an hour in those horrible hard-leather tight ballet shoes with blades.
However simple and quickly thrown together, our little shows pleased people. The local media talked about “rebel figure skaters,” the troupe grew, and we were quickly invited to France for shows organized by private ice rinks.
In France, we were offered a deal: do a few shows for free in exchange for practice ice time. All of the ice rinks are empty at night and in the morning, when hockey players are at work or at school. In city-run ice rinks, the bureaucracy makes such deals impossible, but in the private ice rinks of France, we just borrowed the keys from the owners and went skating for long hours whenever the ice rink was closed or unused. At night, sometimes! We started to go often, for residences that grew longer and longer. We literally exiled in France, to have access to this ice time.
Finally having time to do more than just throw shows together, we started to ask ourselves deep questions:
·       Why are we doing ice shows?
·       Why do we stick with this thing even though ice rinks are so complicated?
·       Why do we freeze our asses in sad looking, foul-smelling refrigerated garages?
I don’t even remember how it came to us but the answer was simple: Glide!
It’s what makes hockey more exciting than soccer. It’s what makes surfing more sexy than beach volley-ball. It’s why people fly to the Rockies to ski, when they could snowshoe in their backyards.
Glide is the possibility to dissociate movement through space from the gestures organically associated to human locomotion: walking, running, jumping, crawling, etc. This means a body can be immobile but move quickly. One of the skating-artists of the troupe calls it “grounded flight.”
Glide is the only thing we have and that dancers, circus artists or comedians don’t have.
Glide is what’s left when you take out those damned sparkles. And I mean “sparkles” in the large sense: TV shows, podiums, judging systems, syrupy music, themes, commentators, princesses.
Later, I would learn that glide is our specificity. With it, we could reach artistic modernity.
And we understood right away that the choreographic possibilities would be endless and completely new.
As soon as we were conscious of this, our shows started to feel better, richer and more natural. Our years of training as top-level figure skaters finally made sense! Where we felt compelled to add barrel jumping, tap skating and fire breathing (check our YouTube channel), in our first naive years, we started to just glide. Simple, pure and rigorously choreographed glide.
And the rest is just lots of sweat, big financial risks and the lives of 5 skating-artists completely invested in this over the course of a few years.
To make the story short, we developed that stuff, self-produced a show in London after another one of those residences in Europe, had a little box-office success, were noticed by the programmers of a big theatre and of a big dance festival (Sadler’s Wells and Dance Umbrella), were offered real residencies and professional support and finally developed Vertical Influences. It got us some awards and accolades, and the show is so fun to do, I would perform it even if I were invisible.
So, that’s what we’re bringing to Guelph! And by the way, Guelph’s Arena is not smelly and not even that cold! It’s a really good one, and I’m not only saying this because they agreed to cancel a few hockey games to let this happen. We can’t wait!
* * * * *
Check out this wonderful video about the making of Vertical Influences