Skip to content
We had the opportunity to ask Susie Burpee a few questions about her career, her previous
presentations at the Guelph Dance Festival and the piece she will be sharing this year with us.
Susie has previously performed at the festival in 2006 and 2010; its great to welcome
her once again in 2018 as we celebrate 20 years of dance in our community!
GD: Can you talk to us a bit about the various performances and workshops you have
brought to Guelph over the years?
SB: The first work I presented at GCDF was in 2006: Mischance and Fair Fortune – a duet
with Dan Wild. The work is inspired by the myth of Pyramus and Thisbe – two lovers who
lived their lives separated by a wall. Long curtains divide the space, and there is a phone
microphone that gets used halfway through the work. I have such fond memories of working
with Taras Cymbalisty and the crew on the production elements.  It was the first time as an
independent artist that I was presenting and performing work outside of my home city, and
the remarkable Taras and crew helped me bring it to life in Studio A.
The second time I brought my work to Guelph, it was 2010. The work wasA Mass Becomes You, a solo work with a radio artist and lots of boom boxes. Once again,
the team at GCDF really became a part of the work, and if I remember correctly, there was
an outstanding stage manager named Dorothy whom I’ll never forget! 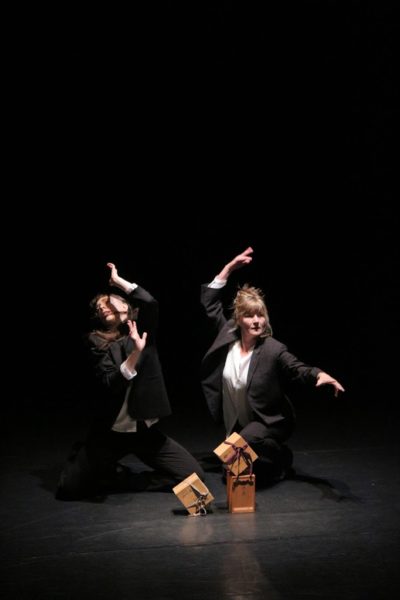 GD: How have you felt your work has evolved or changed over the past 20 years?

SB: These days, I feel really grateful for all that I’ve been able to do (and still can do!) in the
field of dance. As a maker and as performer, I still gravitate toward work that celebrates the
uniqueness of the individual, including the individual within the group.What’s evolved? The
questions I’m asking within my practice. I’m halfway through my life and career, and right
now I’m looking back at all that has happened and using it as a means to move forward.
So the projects I’m doing are about history and memory and using that to make something
meaningful for the future.
GD: What have been your career challenges and highlights and what would you like to see in
the dance world as you move forward?
SB: One of the highlights of my career has been the people with whom I’ve worked. Over
the years, my colleagues in dance have been the brightest, smartest, most interesting, and
most luminous people I’ve ever known. I feel honoured to have had so many meaningful
working relationships with people who have challenged and enriched my artistic experience.
Dance is social. We communicate our ideas and negotiate space in and around each other.
We know that when we move, there is a ripple effect of our actions. The act of dancing
embodies ideas that our world needs right now. Moving forward, I would like to see these
ideas illuminated more publicly. I would like that dance remember and use its political power.
I’m trying to figure out what my role is within this. 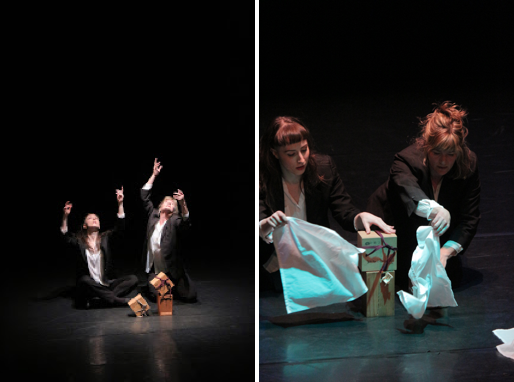 GD: Can you tell us a little about about the work you are bringing this year?

SB: Cotton Handkerchiefs and Dog’s Tears is a duet by Tedd Robinson that I dance with the
amazing Robyn Thomson Kacki. Here’s the background of how it came about:

Contemporary Dancers, where a teenage Susie Burpee sat in the audience and watched
his astonishing dance theatre works take the stage. In the late 90’s, as a dancer at Ottawa’s
Le Groupe Dance Lab, Susie would finally dance in Tedd’s work, and a long-term artistic
relationship was forged. Fast forward to 2008, when a younger Winnipeg-based dancer,
Robyn Thomson Kacki, came to study with Tedd and Susie in a summer workshop. A
triangle was formed – three different generational points of view, connected by a history of
place and memory. This is the foundation for Cotton Handkerchiefs and Dog’s Tears –
“a metaphysical post-modern treatise on ‘home'” (Holly Harris, Dance International).
You can catch Susie Burpee and Robyn Thomson Kacki on Friday, June 1st as part of the
On the Stage A series, presented at the River Run Centre at 8:30pm. For more information
visit https://www.guelphdance.ca/festival/2018-on-the-stage/
Production photos for Cotton Handkerchiefs and Dog’s Tears by Mark Dela Cruz