Skip to content
The In the Park series this year includes a collaborative performance by the Young Company of Halifax Dance and the Guelph Youth Dance Company. We asked Gillian Seaward-Boone, one of the rehearsal directors from Halifax, to tell us more about the piece and the process that brought it together.
In the Park takes place Friday, June 2, 6 pm (Hanlon Creek Park), and Saturday and Sunday, June 3-4, 12 pm (Exhibition Park).
Detailed information: www.guelphdance.ca
……………………… 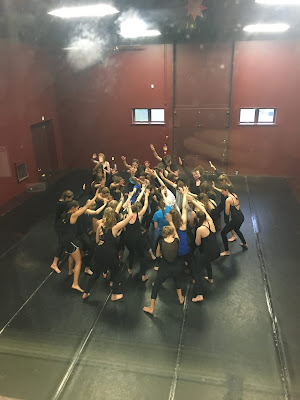 It’s hard not to be excited by the energy of nearly 40 young dancers in a studio throwing themselves into a dynamic and fastpaced choreography, especially when you have three short days to complete the work. On top of that, add the buzz of two groups from different provinces finally meeting face-to-face after weeks of texting and emailing, suddenly living together for 5 whole days. The first chapter of the exchange between the Guelph Youth Dance Ensemble and Halifax Dance’s Young Company was exhilarating, exhausting and wonderful.
Our two performance groups were brought together through an exchange with Experiences Canada, an initiative of Canadian Heritage that looks to provide Canadian youth with exchange programs that will broaden their understanding of their community, local and national heritage and culture. Our goal was to build a work that they could perform together at the Guelph Dance Festival this spring. Serendipitously, Mocean Dance (a professional dance company based out of Halifax, Nova Scotia) had just celebrated its 15th anniversary season in September with a piece entitled 15 for 15 that featured fifteen choreographers creating one minute mini choreographies for fifteen dancers at a time. The end result was a huge success. So my co-director, Sara, and I wondered what would happen if we transformed the vignettes and placed them on 40 bodies moving at once? What resulted was Together We Rise.

Through a magical residency weekend at Ross Creek Centre for the Arts in Canning, Nova Scotia, we began to build a colossal body of work in a very short amount of time. Since the original Mocean piece involved fifteen different choreographers, most of whom are Canadian, we were able to educate the group on the Canadian dance community around them and teach them about some key players in the landscape. We adapted sections to make room for such a large group and we expanded sections to fill the outdoor space they would eventually perform in. Janet, Sara and I watched as our students worked together tirelessly to create something so exciting and so fun that it gave us 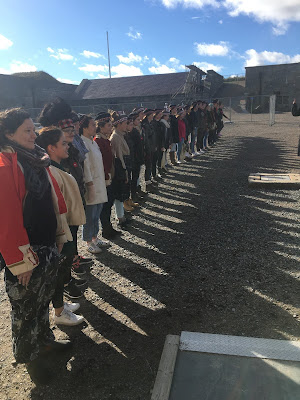 goosebumps. Imagine the power of forty dancers vocalizing as loud as possible. Imagine the actual wind they generate when they run through the space together. Imagine the level of concentration it takes to stay focused with forty people in a studio! To say we were proud of them would be a gigantic understatement. The end result is a piece that somehow showcases each dancer’s individuality while moving as a cohesive team all at once. It’s extremely accessible, playful and poetic.

We have missed our Guelph friends over the past few months, but the anticipation of finally having our groups together again grows every rehearsal. It’s going to be a memorable weekend and we can’t wait to share this journey with you!