Skip to content
This week’s Artist Spotlight blog is guest-authored by Colleen Snell, artistic director of Frog in Hand. The company performs its new work Dragon in the In the Park series, at Exhibition Park on Thursday, June 2nd, 7 pm; Saturday, June 4th, 12 pm; and Sunday, June 5th, 12 pm; and at our new park location, Hanlon Creek Park, on Friday, June 3rd, 5:30 pm.

Frog in Hand is a multidisciplinary and site-specific performance company based in Mississauga, Ontario. We mix dance and theatre with visual art, costume and design. Last year we performed our 1920s inspired piece,

Café Noisette, for the In the Park series with the Guelph Dance Festival. This year we are thrilled to return with another exciting production, Dragon. 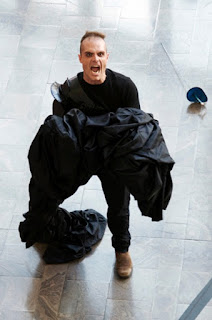 The Production
Dragon is the timeless story of two knights on a quest to slay a dragon, yet it is no traditional fight between good and evil. When these knights find their dragon, they do not encounter the beast they expect. After a struggle, they learn the consequences of their violent acts; they redefine the meaning of courage and realize the redemptive power of empathy. Our production is an epic legend blending swordplay with dance, magnificent costumes and immersive set design. Damian Norman (dancer, actor), Colleen Snell (dancer, certified actor combatant) and Andy Ingram (certified actor combatant and fight director) bring this tale to life while Joe Pagnan (lighting/set designer) and Noelle Hamlyn (textile artist, costume designer) construct and design the visuals. 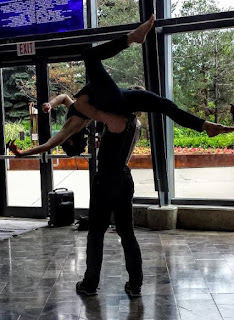 The plot of our production is simple, yet deeper metaphors lie beneath this recognizable exterior. Dragonmanipulates a traditional legend as a way of studying greed, humanity’s strained relationship with nature, the power of movement to cross borders between cultures and the overarching importance of myth and archetype in defining a collective human identity. Oh – this is of course in addition to swashbuckling fun, breathtaking feats of physical prowess and spine tingling thrills.
The Process
Dragon was created for the Off the Wall project, a multi-arts event Frog in Hand organized in collaboration with the Living Arts Centre and the Art Gallery of Mississauga. Off the Wall 2015 involved twenty-three artists of all disciplines who worked in five teams to create original, site-specific performances. While Damian, Joe, Colleen, Noelle and Andy had worked together previously they had never worked all together in one group. Andy and Joe had never even met! This creative team had three 7-hour days to devise an original show for the grand staircase in the Living Arts Centre. The work premiered on the fourth day. 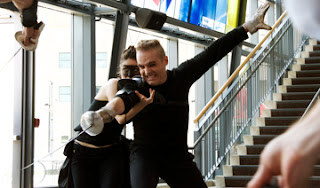 Everyone was challenged and surprised by this project as we encountered our characters and crafted our story. Noelle and Joe were confronted with the task of creating the dragon tail (constructed with metal hoops), and transforming the staircase into the dragon’s nest. Damian learned sword work with Andy, who choreographed the fight sequences. Colleen physically researched how a dragon might move and interact. Together we questioned and built a narrative arc, fusing our professional perspectives as actors, dancers, visual artists, and fight choreographers into one project. Certainly the pressure of time was stressful, yet it was also helpful – providing urgency to our process and making each decision count. The work was a hit with our audience, who told us they liked the exciting music, breathtaking action and moving storyline. We’ve since reworked and revisited the piece, performing it in Kitchener for Night/Shift2015. We are thrilled to bring Dragonto Guelph, and can’t wait to share it with new audiences for the In the Park series.
Video below shows excerpts from ‘Off the Wall.’ You’ll easily find ‘Dragon!’ Take a look.
Full Festival schedule can be viewed on our website. So much great contemporary dance in four amazing days!